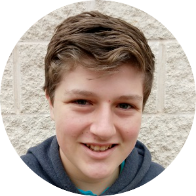 My father graduated high school in 1980, a time in the Soviet Union when antisemitism was technically illegal but routinely practiced. Despite the odds, he was granted admission to the foremost physical-mathematical high school in Kiev and graduated with highest honors and the dream to pursue his passion in theoretical mathematics. Gaining admission to the University of Moscow necessitated entrance exams. He knew it was over from the moment he entered the designated “Jew” testing room. Spoiler alert: he was rejected.

My father never gave up his passion for math and bestowed it upon my brothers and I. Since I was a toddler, my father gave us math puzzles, and we spent the larger part of most evenings solving them on the living room couch as a family.

When I entered high school, I continued to seek more opportunities to learn math. At the beginning of Sophomore year, I founded the math club for those not as mathematically inclined to discover their love for the topic and the math team so that we could compete. However, when we began looking for events for our newly founded math team to compete in, I found that they all took place on Saturday. We are a Jewish school. Competing on Saturdays was a no go.

We could have stopped there. But I decided to persist. In Russia, my father was prevented from pursuing his passion for math because he was Jewish. A generation later, here I was, a Jewish student, like many across the world, having to choose between religious practice and the pursuit of competitive mathematics. I had to do something about it. And I did. Thus, the Jewish High School Math League was born.

In both of the last two years, one thousand Jewish students representing 50+ schools from across 6 continents took the test in 5 different languages. I am beyond excited at the incredible support we received and that we are continuing our work developing opportunities for Jewish students in mathematics across the world.

If you have any questions, please feel free to reach out and I’d be happy to help. Looking forward to speaking with you soon.

An organization dedicated to promoting and contributing to the development and growth of mathematics among the new generation of Jewish youth by holding international competitions and establishing a network of Jewish teens passionate about math.

About us
Blog
Contest
Problem of the Week
Contact Us